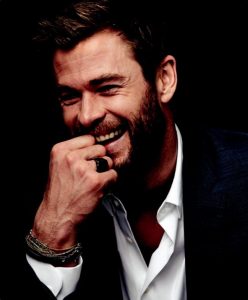 Chris Hemsworth’s best-known acting turn is playing Thor, the superhero and hammer-weilding mythological god, in six Marvel Universe blockbuster movies. But he may be even more famous for being impossibly good-looking. The azure-eyed Austrailian was named People magazine’s “Sexiest Man Alive” in 2014 and recently was called “The Manliest Man in Hollywood” by GQ. A Vanity Fair writer who profiled the hearthrob notes that Hemsworth’s “handsomeness is so extrememe it can’t be denied or ignored, or even played down.”

All this effusive adoration could go to a guy’s head, but this down-to-earth family man can cut through the puff with self-deprecating humor. Thus Hemsworth lampooned himself on Saturday Night Live: “When I got to Hollywood, they said I’d never make it as an actor –  they said I was too tall, too blong, my muscles were too big…” And he had tongue firmly in cheek playing Kevin, a hot-but-dumb receptionist in the 2016 Ghostbusters reboot, riffing with improv dynamos Kate McKinnon, Kristen Wiig and Melissa McCarthy. Like other Aussie imports – including Naomi Watts, Heath Ledger and Simon Baker – Hemsworth began his acting career on the Down-Under soap opera Home and Away.

American Audiences were introduced to Hemsworth in 2009 when he played George Kirk in Star Trek. Since then he’s played a hacker (in 2015’s Black-hat), a hunstman and a Hunt – that is, a title character in the fantasy films Snow White and the Huntsman (2012) and The Huntsman: The Winter’s War (2016) and the hard-drinking, womanizing Formula One race car driver James Hunt in the biographical Rush (2013). The actor, who turns 26 in August, will portray Thor of the seventh time in a new Avengers flick this summer. As if one summer blockbuster isn’t enough, Hemsworth also will star in a Men in Black spin-off.

Growing up, Hemsworth’s family moved several times among Melbourne, the remote town of Bulman (a cattle station in Australia’s Northern Territory outback) and Philip Island, where he first fell in love with surfing. He’s the middle child between two four-letter L-words, older brother Luke and younger brother Liam. They’re actors too. In fact, the Aussie’s sentimental superhero role nearly went to Liam instead. Hemsworth’s initial audition for Thor went so badly he didn’t hear back from producers for months, while his brother received several callbacks for the part. When Hemsworth finally got called in for a second audition, his improved reading was fueled by a new motivation, as he told W: “Maybe frustration that my little brother had gotten further than me. A little sibling rivalry sort of kicked up.” Score a win for the middle kid.

The bankable leading man’s style has been likened to those of the late Steve McQueen and James Dean because he favors looks that are classic masculine. He is often seen out and about in a dark pair of jeans – fitted but never skinny – with a white shirt and a casual leather jacket with gold-rimmed aviator glasses or classic Ray-Ban Wayfarers.

While Hemsworth shines as bright as any star in Hollywood, this husband (to actress Elsa Pataky) and father (of 6-year-old daughter India and 4-year-old twin sons Sasha and Tristan) moved his brood out of L.A. in 2015. Yearing to return to the natural space – and pace – of his home country, he relocated his family to Byron Bay, a beach town on Australia’s east coast near some legendary surf breaks.

When off-set and miles away from trendy L.A., Hemsworth’s style reflects the proud beach-bum side of his personality – a day-to-day look that consists of Hurley board shorts and a T-shirt. He has said he spends a lot of time at the beach and likes to wear earthy tones in that environment. On screen, at the point break or at a premeire, this Aussie hunk bears watching.